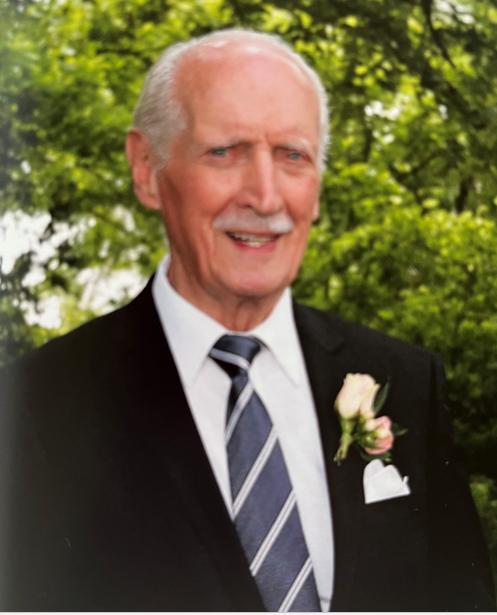 William passed away peacefully in his sleep on Saturday August 20, 2022, at the age of 97. Cherished and loving husband of Athena for 72 years, devoted father to Joanne (Donald) and Karen (Adrian), proud and dedicated grandfather to Alana (Eric), Andrea (Adam), Lauren (James) and Lisen (Zahid) and affectionate great-grandfather to Ethan, Marshall, Ella, Ashley, Alexandra, Amelia and Sami. Born in Toronto on June 24, 1925, William was the son of the late Jack and Helen Johnston and brother of Barbara (late Wilson). He will be fondly remembered by his sister-in-law Martha (late Keith), and will be sadly missed by his many nieces, nephews, family friends and neighbours.
William (Bill) was a proud Canadian and left his studies at the University of Toronto to join the Royal Canadian Navy in the fall of 1943 to proudly serve for two years during WW II. Upon his discharge, Bill completed his education at U of T and embarked on what became an impressive business career. Starting initially in sales with Proctor and Gamble he then moved quickly into transportation and warehousing for the company.
Transportation became Bill’s forte and he held positions with Inter-City Truck Lines, Smith Transport and finally DOFASCO, where he was the General Traffic Manager, responsible for the movement of seven million tons of raw materials and four million tons of finished goods. Bill remained at DOFASCO until his retirement in 1992. When asked about all his accomplishments in the field of transportation, he said the one he considered most important was working with the railways on the shipment of steel on bulkhead freight cars that had not been done before in North America.
Bill was a contributing member of the Canadian Industrial Traffic League, the Toronto Transportation Club, the Canadian Manufacturers’ Association, and the Canadian Chamber of Commerce National Transportation Committee. Over his years of involvement with these organizations, Bill held the position of chairman of many committees and was Vice-president of the CITL in 1963 and President of the Toronto Transportation Club in 1988.
A longtime member of St. Georges Golf and Country Club, Bill was an avid golfer and curler. He also loved to ski and took several ski trips to Vail and Europe with his ski buddies. His monthly poker group was one of his favourite evenings out. Bill and Athena were dedicated bridge players and belonged to several bridge groups over the years. They also enjoyed many, happy times with their Oakville coffee group. Bill loved nothing more than a good game of euchre or cribbage with his family at his daughter’s cottage every summer.
In his early fifties, Bill realized his dream of flying by earning his private pilot’s license. At the same time, he believed that a bilingual Canada was a wonderful idea and spent many evenings taking courses to become fluent in French. Bill was always described as a true gentleman, distinguished, with a witty sense of humour and great intelligence. He will be deeply missed by all who graced his path.
The family would like to thank Sunrise of Erin Mills for their care and compassion over the past two years.
A private family service will be held. If desired, donations may be made to his preferred charity The War Amps or to the charity of your choice.
Online condolences at www.etouch.ca