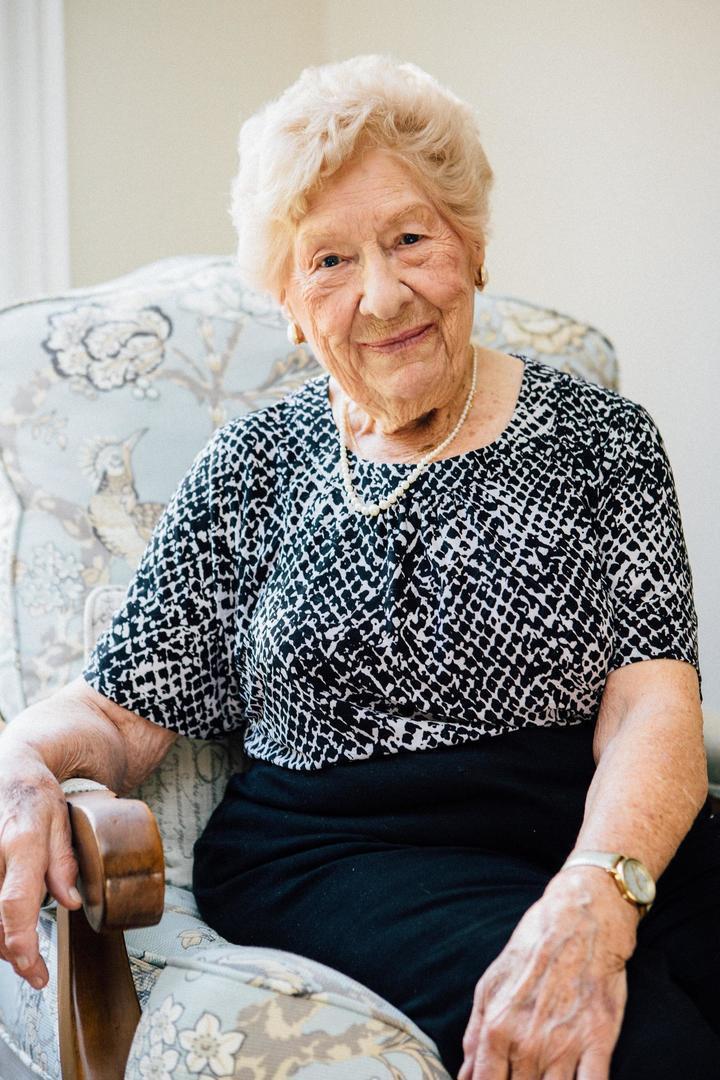 Born in Minneapolis, Minnesota in 1923, the second child and eldest daughter of Otto and Helen Biorn, her childhood was marked by the Depression. If the Depression did not define Virginia, it certainly shaped her character and her outlook. From the Depression and her family’s response to it came a strong work ethic, a “can-do” attitude, a faith in the goodness and power of people, and confidence in the ability of people and societies to overcome whatever challenges they might face if they work together, and do not give up. Overcoming this hardship as a family inspired Virginia’s unwavering confidence and optimism about the future. She presented as an easy-going person of light-hearted disposition throughout her life, her attitude of happiness was a tough, informed and conscious act of will forged and tested in the furnace of the Depression era.

Virginia served in the US Women’s Army Corps during WWII as an air traffic controller and was stationed in Whitehorse, Yukon where she met her husband-to-be James Edward (Ted) Morris of Toronto. Married in 1947, Ted and Gini moved to Toronto, rented a small apartment in a house on Neville Park Road at the east end of the Queen car line and started a family. Three years later, in 1951 they purchased a house in North York where they lived for the next 15 years. The house is gone now, but the warm memories of Virginia wearing pedal-pusher pants, a sleeveless, collared, white cotton blouse and saddle-shoes and singing “The Moon Shines Bright (on Charlie Chaplin)” while demonstrating tap-dance to the kids in the kitchen, continue to live on.

Each summer the Morris family returned to Minnesota to visit Helen and Otto Biorn and the whole Biorn family. The “trip to Minneapolis” was a tradition Virginia continued until 2017. When in 1980 she was widowed at the age of 57, she worked at Bell Canada and dedicated herself to her now grown children and their families. As an independent senior she took on new adventures, spending a whole summer in Yellowstone National Park, and holidaying and visiting wartime friends in Florida, Nashville, California, Washington and Hawaii. She was a constant in her children’s and grandchildren’s lives, where she would lend a generous, helping hand without hesitation. “Grandma Gini” was an integral part of holidays, birthdays, beach and ski vacations, cottage weekends and Sunday dinners. More remarkably, she was present for many of the informal events of life: weeknight meals, baseball practice and school pickups. She enjoyed welcoming family into her home on a moment’s notice, fuelled by an ever-present pot of coffee she was eager to share life experiences and memories from her past, stories that are now also cherished by her children and grandchildren. Until age 94, she lived independently in her own house. Ever the optimist, only reluctantly did she give up driving at 94 years of age when the supercharged Buick (that she bought new) finally gave out, long after logging more than 100,000 miles.

Virginia loved coffee, butter, the colour blue, playing cards, a good hamburger, baking apple pie, eating dessert and being around children and family. She skied a black diamond run at Waterville Valley, New Hampshire on her last ski trip (as a skiing participant) at age 71. She was an avid reader and read many books and every line of the weekend newspapers and was a boisterous fan of both the Toronto Maple Leafs and the Toronto Blue Jays. She stayed bright-eyed and active, making it a priority to keep moving by taking walks or swimming in Lake Huron and Koshlong Lake.

Optimism was Virginia’s secret weapon. It was an informed optimism and not just stubborn dogmatism. She was a leader, too, but her leadership came quietly and from behind as questioning and tending to “the small things”, so the big things could take care of themselves. And when she hugged you, you were really being hugged, by a wonderful mother and grandmother in the process of living genuinely, generously, enthusiastically, and lovingly in the moment. Her kindness, warmth and positive, relaxed approach to life will be missed by all who knew her.

A private family service will be held at Pine Hills. In lieu of flowers, donations can be made in her memory to the Schulich Heart Centre at Sunnybrook Hospital in Toronto.