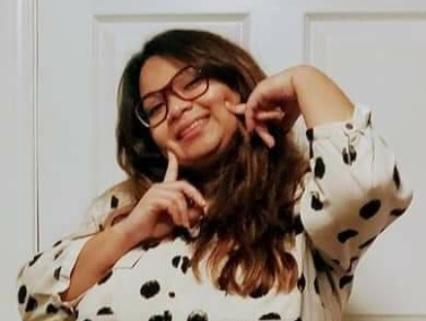 Udita Rodger Joseph (Meetu), 38, was called to Heaven on March 30, 2021. Udita was born on November 25, 1982 in Dhamtari City, Chhattisgarh, India. She moved to Mississauga City, Canada with her family in May 2019, where she lived in the area for the remainder of her life. Udita married Sachin, her beloved husband, on April 27th, 2011 (yes it was ending 2010 when they both were serving in Fortis Healthcare Ltd. New Delhi, Udita as a Nursing Educator and Sachin as a Senior Administrative Officer) and they enjoyed 10 wonderful married years together. Udita and Sachin were truly best friends. Whether they were driving their car together, exercising, vacationing in Kausali, Mussoorie, Roorkee and Canada or just passing time, Udita was always the happiest when they were together. She was a proud mother of her child, Aaron. It was her privilege that the Lord helped her to lead her son to receive Jesus as his savior when he was just 6 yrs old.
Udita was a 2001 graduate of Frank Anthony Senior High School and earned her master’s degree in Nursing (2010) from RAK College (The Rajkumari Amrit Kaur College of Nursing is a pioneer institute for nursing education in India and South East Asian region offering basic and higher education programmes. It is controlled financially by Ministry of Health and Family Welfare and academically affiliated to University of Delhi as Department of Nursing under faculty of science. The primary objective of the College is to provide and promote education and research in the field of nursing., Delhi, India.) She also championed Clinical research college diploma from Oxford College, Canada. She was a star performer in University Health Network (UHN) Canada. She went on to become the Case Manager at Ministry of Health, Peel Centre ON, where she designed and revolutionized many COVID-19 Screening tools that are still in use today. Prior to this assignment, she traveled extensively in India for her publications job, at Reed Elsevier and loved talking about the unique places she visited. Udita was appointed at various levels in leading healthcare organizations like Fortis Healthcare Ltd., Amity University as a Professor Community Nursing, Paras Hospitals as Nursing Superintendent. Both Udita and Sachin started their own new ventures with a confidence they directly attributed to family, sincere work, dedication, and commitment.
She was the eldest in a family of two. She received Jesus as her personal saviour at the age of 09 yrs. Udita was close with her brother and spent a lot of time with him that continued throughout adulthood. She had so many wonderful stories and memories that she would often share with others. The Joseph family was always known for large gatherings and fun traditions.
Udita was an avid lake observer and spent many summer days with family and friends at the Lake Ontario. She found tremendous joy in teaching countless people to preach the Gospel. Her mastery of delivering Biblical sermons was simply marvelous to watch and that was from her personal commitment to study the Word of God.
Udita had a playful sense of humor that brought much joy to all those she encountered, including Aaron and her family. They meant the world to her. Many of the games they loved and played were games she invented or bought.
Udita was one of a kind! Her charismatic personality made her fun to be around. She was welcoming and always had a calming, inviting demeanor. While not one to ask for help for herself, she was always the first to offer help to others. She never sought acknowledgement or recognition for her good deeds. She had a strong faith that helped guide her moral compass. Her conscience was her guide, providing her the blueprint to be the best mother, wife, daughter, daughter-in-law, and friend.
In addition to her Cousin brother Vinay, Uncle Komal, Udita is preceded in death by her grandfather, grandmother both paternal and maternal and she is survived by her loving husband, her beloved 8 yrs only son Aaron, younger brother, father, mother, father-in-law, mother-in-law and many more family and friends.
"Udita will be missed by her mother-in-law as her fond memories of a good, God fearing daughter-in-law and also by her father-in-law as he found in her a lively persona and appetizing variety foods she used to prepare for the family."
Her mother who watched her breathing her last says “Udita has been walking with her Saviour Lord Jesus Christ and at that moment, the Lord took her with Him to heavenly abode.”

Christian Burial service will be held on April 01st , 2021 at 15:00 Hrs EDT( Canadian Time), (IST 12:30 am on April 02nd ) at Meadowvale Cemetery, 7732 Mavis Road, Brampton, ON L6Y 5L5 , For family members, inurnment will be held at Cemetery, In order to minimize the risk of gathering at this time, the family would like to offer an option of viewing the Mass remotely by providing a link to the live-streaming of the ceremony below streaming will be available 15 mins before the ceremony starts. Also, a recording of the Mass will be accessible via the link provided: https://www.facebook.com/

(The family wishes this to be a private event.)
Meadowvale Cemetery, Cremation & Funeral Centres
7732 Mavis Road, Brampton, ON, CANADA, L6Y 5L5 Get Directions
Thursday, 1 Apr 2021 3:00 PM
Info: Please note that due to Covid-19 restrictions, there will be a limitation of the attendees. Attendance is by invitation only. Please feel free to leave the family a condolence on the webpage to show your support.
Order Flowers
Make a Donation
Help Extend the Memorial
Order a Keepsake Book