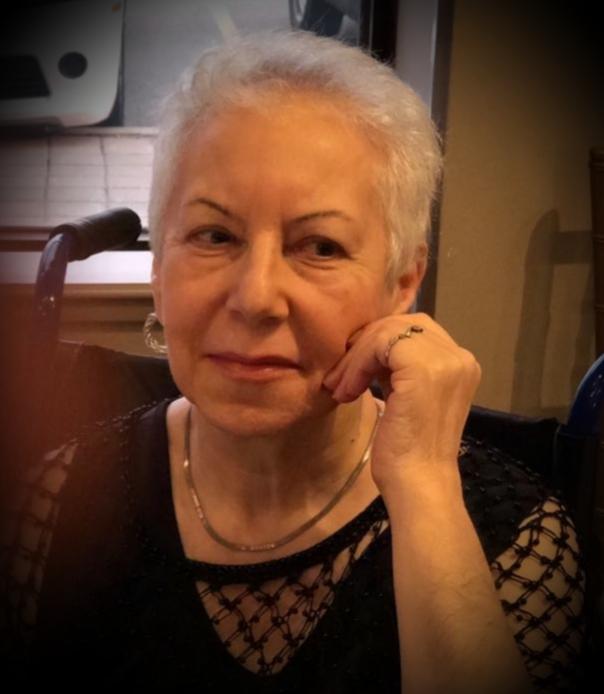 Her strength, resilience and courage will forever live on in her three sons and grand daughters. Her perseverance through insurmountable adversity, her hard work, and her passion for the future, for the sake of her children, will forever be remembered by those close to her. Her family takes solace in knowing that she is no longer in pain and reunited with the love of her life, Manoucher Dabiri, as well as with her late parents Agha Joon & Beji. May her friends and loved ones remember her by her enormous pride, devotion to her family and the unshakable strength of her character until her last moments. She will be missed greatly by her sons, her daughter in laws Negin and Layla, and her granddaughters. Her absence will be felt sorely by all those who knew her.

Tahmineh, also known as Tammy by many of her friends, was a very strong, dignified, and courageous woman. She was a loving wife and a nurturing mother to her three sons. In 1990 she moved to Canada with 2 of her children with nothing more than a couple of suitcases and a few hundred dollars, in hopes of a better life for her kids. This in itself was a true testament of her profound courage and unwavering determination to provide a better future for her kids, an opportunity that may have been missed had they remained in Iran. She was a provider, a mentor, and a hard working mother who dedicated her life to raising three boys, a challenging task at best. The everyday stressors of life along with the hardship of starting all over in a foreign country slowly took a toll on her, both mentally and physically. But through it all, she managed to put on a brave face day in and day out, taking on life's challenges as they presented themselves.

14 years ago, our beloved mother was diagnosed with Parkinson's, a degenerative disease that eventually caused her to slow down. She could no longer work, tend to her garden, drive, or take part in certain activities. As her body slowly became frail and worn out, she became more dependent on her family. Luckily, she had a loving and supportive husband and three adult sons, who were able and more than willing to step in and provide her the family support she required. Sadly the loss of her husband in 2017 caused her health to deteriorate even further. But her sons were always there to provide for her the best they could as she did for them when they were younger. Unable to care for herself at home, and with her children out of the house, she decided it would be best to move into a seniors retirement building. This allowed her to maintain her independence while receiving help from support staff, her sons, and many dear and close friends.

She took pride in her religion and was a devout Christian. She participated in weekly Bible study nights which brought a different sense of peace and calmness to her physical and spiritual being. She also took pride in being a grandmother as she would beam with an exuberant smile every time she saw her grandchildren. Not having any girls of her own, she was more than content that God had provided her with three beautiful granddaughters. Unfortunately during the recent pandemic, almost all interactions were done through video chat. Although she only saw her youngest granddaughter once in person, she would constantly request for pictures and video clips, which she received in abundance.

She found joy in the smaller acts of kindness in life and attained the most with as little as possible. Her words of wisdom carried weight because of all the challenges she had overcome in life. In the last few months leading to her final departure, she constantly reminded her sons to be kind to one another, not give in to hatred and greed, to dispel negative thoughts and hostility, but most importantly, to provide the best possible life for their families, especially their children.

Her tired heart was warm and filled with everlasting love, even as she lay peacefully in her bed on that final night. God was well aware of her agonizing pain and decided the time was right. He gently wrapped his arms around her and gave her wings that night....Always our Mother, forever our Angel; we will always see your glowing halo when we look into the Sky.