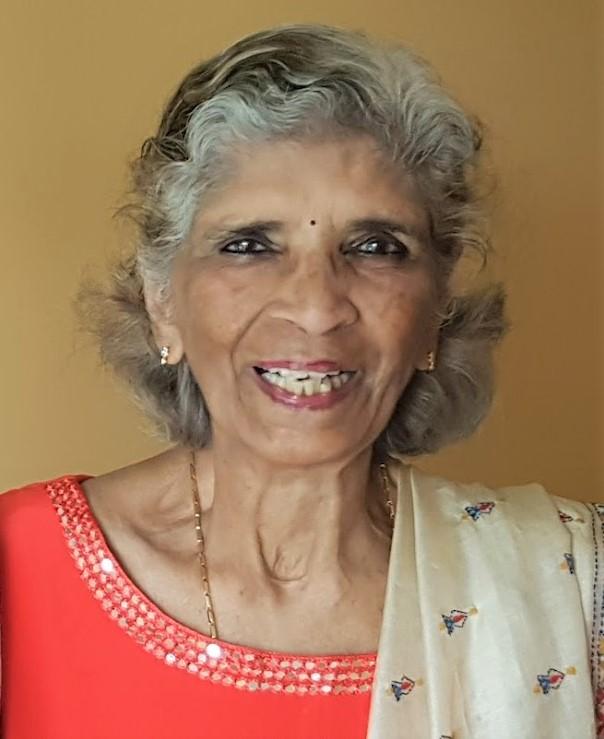 Born May 17th, 1936 in Machilipatnam, Andhra Pradesh, India, Sakuntala was the youngest daughter of Tangirala Satyanarayana and Ramanamma. Growing up in the final years of British India, Sakuntala attended the Stewart School in Cuttack where she was captain of the field hockey team and a champion of the debating team. Sakuntala went on to graduate with a BA from Akkineni Nageswara Rao College in Gudivada in 1958, and earned a B Ed from the University of Calcutta in 1962.

On February 2nd, 1957 she married her late husband Radha Pisipati Krishna, a professional engineer. Kindred spirits, Radha and Sakuntala were deeply devoted to each other, building a lifelong partnership based on love, mutual respect and a commitment to personal and spiritual growth. Together, they shared 63 wonderful, adventurous years until his passing on September 1, 2020.

In 1964, Sakuntala began her career as a teacher at Vidyodaya Girls High School in Madras (now Chennai). After a few years of teaching in India, Sakuntala and her family immigrated to Canada, settling in Toronto, Ontario in 1970. With their new life in Canada, Sakuntala continued teaching as a Special Education teacher with the Metro Toronto Board of Education. She and Radha went on to raise 3 children and built a successful life together, earning the admiration of many in the South Indian community of Greater Toronto.

Sakuntala retired in 1992 and joined Radha in Houston, Texas where he was working at the time. During these years, Sakuntala built a house in Kodai Kanal, India, thereby fulfilling a lifelong dream to live in the natural beauty and quietude of the hills of south India. She and Radha lived in Kodai Kanal after he retired in 1997, while spending the summers with their children in Toronto, in the process building a whole new community of friends.

Active and artistic, Sakuntala enjoyed doll-making, learned to swim and cross-country ski, and was a passionate lover of Indian classical music. An advocate for the rights of women and the value of education, she was a role model to the many young women who came to know her. Despite her many migrations, Sakuntala maintained close relationships with her large extended family and wide circle of friends across the globe. She was cherished for her warmth and generosity, admired for her courage and resilience, and respected for living life on her terms.

Sakuntala’s memory lives on through her children, and grandchildren. She is forever in the hearts of her children; Shaila (Ramana), Srinivas and Sudhamshu (Kaye). Adored grandmother to Nikasha, Avinash, Lakshya Ray, Aspen and Rohan. She will be deeply missed by her extended family and friends.

Meadowvale Cemetery, Cremation & Funeral Centres
7732 Mavis Road, Brampton, ON, CANADA, L6Y 5L5 Get Directions
Monday, 13 Sep 2021 1:00 PM - 2:00 PM
Info: We ask for guests to be mindful of their time spent in our chapel, as per the pandemic restrictions there can only be a limited amount of people inside the building at one time. For those entering into the Funeral Centre, a face mask/covering must be worn. We ask those who are feeling unwell to please stay home, a webcasting of Sakuntala's funeral service will be made available beginning at 1:00pm (A link will appear above her photo)

Meadowvale Cemetery, Cremation & Funeral Centres
7732 Mavis Road, Brampton, ON, CANADA, L6Y 5L5 Get Directions
Monday, 13 Sep 2021 2:00 PM
Info: For those entering into the Funeral Centre, a face mask/covering must be worn. We ask those who are feeling unwell to please stay home, a webcasting of Sakuntala's funeral service will be made available beginning at 1:45pm (A link will appear above her photo)
Order Flowers
Make a Donation
Help Extend the Memorial
Order a Keepsake Book