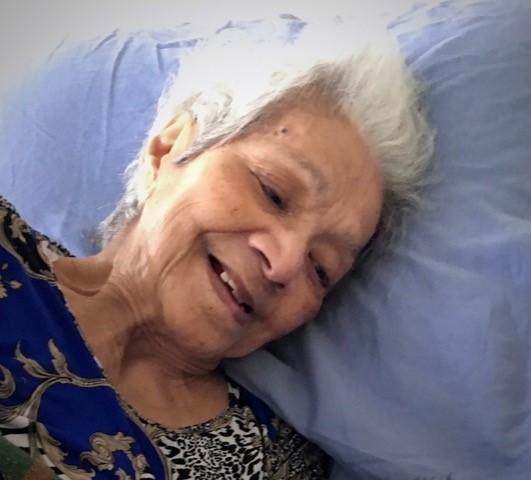 Ruby passed away peacefully at her residence in Toronto, Canada, after a long illness. She was predeceased by her sisters Viola, Ena, Winnie, Sylvia and Wilma, and her brothers, Wilfred and Winston; She was the Aunt of Cintra Cassidy (Patrick dec.), Sonia Chater (Keith), Gerard Moosai-Maharaj (Dorothy), Indira Reynolds (Gord dec.), Neil Ramdeholl (Victoria), Kirk Samlalsingh (Colleen dec.) and Kimberley Jodhan (Roddy); a Great Aunt to their children and a Great Great Aunt to eight. She was a cousin of the Kowlessars, the Samlalsinghs, the Boodoosinghs, the Sammys, and the Bissessars; and a dear friend to many in Trinidad, across Canada, in the U.K. and beyond.
Ruby lived a full, long and enviable life. After a B.A. degree at the University of Manitoba, followed by a diploma in the Social Sciences at the University of Liverpool, she returned to the West Indies where she is remembered, most importantly, for her work in British Guyana in the 1950’s. There she was greatly responsible for improving the lot of the families of the Sugar Estate workers. She always maintained that this was the job which gave her the greatest satisfaction and fulfilment. Ruby later worked at the University of the West Indies before returning to Canada and McGill University in 1963 where she completed a Masters’ degree in Economics. There was a stint at the Bank before entering government service both at the federal and provincial level. She ended her career in the Office of the Premier in Ontario and the Ministry of Labour in 1986.
Ruby’s interests were wide and varied. She loved people, her family, and she had many faithful and true friends. She was a great hostess. She enjoyed opera tours to the United States and to Europe and her travels took her to India and Sri Lanka, across Europe and into Scandinavia, to Vietnam and Cambodia, to Israel and Egypt and many others places in between. In so many ways, however, Ruby’s heart remained in the Claxton Bay of her youth and in the house in which she grew up and that she adored even to the end.

In Ruby's honor, donations can be made to the Church on the Hill Food Bank.

She will not be forgotten.

Mount Pleasant Cemetery, Cremation & Funeral Centres
375 Mount Pleasant Road, Toronto, ON, CANADA, M4T 2V8 Get Directions
Saturday, 16 Jan 2021 1:30 PM - 2:30 PM
Info: Due to COVID restrictions attendance is by invitation only. To view the service please go on Ruby's memorial webpage and click on the "Livestream" link at 1:25 pm Saturday, January 16th. If any issues with tuning in please contact Mount Pleasant Funeral Centre at 416-485-5572. Thank you for you understanding. A copy of the Order of Service is located under the "Media" tab, then click on "Documents".
Make a Donation
Help Extend the Memorial
Order a Keepsake Book