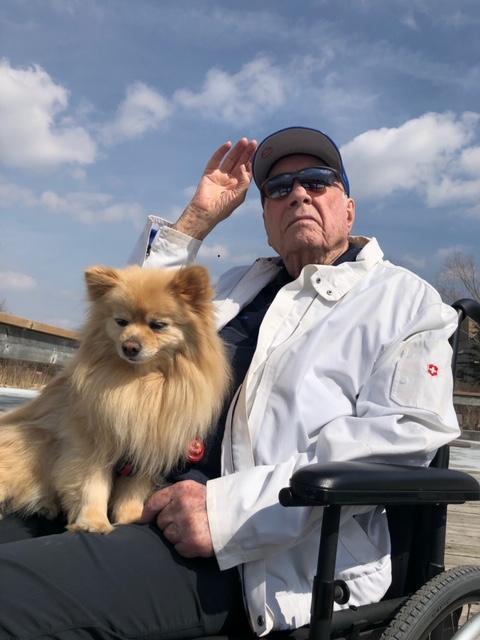 Peacefully, in his favorite chair, in the early hours of March 2, 2020 Roy took leave of his physical body. Born to William John and Ethel Blackwell in a small railroad home on Marlborough Ave in Toronto, in 1929, Roy was a middle child and one of 7 children – 5 boys and 2 girls. While working at his first job, for Coca Cola, Roy was introduced to the love of his life, Mary, and they married on a rainy day, November 4, 1950. In 1959, three children in tow and one on the way, they left Toronto for Newmarket to live in their brand-new home. Roy spent many years working for the Toronto Transit Commission as a subway, streetcar and bus driver. His real passion, however, was music and he followed his dream in 1965 opening Newmarket’s first music store: Blackwell’s. He loved to play guitar and sing and he and Mary (on mandolin) hosted many sing-a-longs with friends and family. There was always a party, music, good food and friends at their home. After the music store was sold, Roy worked in Real Estate, and, finally retired from his position as Assistant Supervisor of Transportation with the North York Board of Education, to enjoy their Haliburton cottage in the summer and winter home in Fort Myers, Florida.
A loving and devoted husband, son, brother, father, uncle, grandfather and great-grandfather, Roy was always available to lend a helping hand. While extraordinarily sensitive, he believed in honesty and forgiveness and would often share his opinions and advice freely. His strong work ethic was paramount to his success and he ensured all of his children understood the importance of commitment and a job well done. While he worked hard, he also played hard and his sense of humour was beyond compare. There was nothing Roy enjoyed more than a good belly laugh with his friends and family.
Roy is preceded in death by Mary, his wife and partner of 58 years, his sisters: Marjorie and Ethel, and his brothers: William and Victor. He is survived by his children: Sharon (Kent), Arlene (Tom), David (Pat), Carole (Dan) and Connie (Richard); his grandchildren: Jodi, Justin, Kerry, Graham, Gregory, Colin, Evan, Callie and Clara, his great-grandchildren: Everleigh, Willow and Nico and his dear brothers: Harry and Doug and his beloved dog Benji.
Special thanks to his loving caregivers, Ellen, Tashi and Palak who always made his days special. Roy’s ashes will be placed next to Mary’s, at Mt Pleasant Cemetery, in a private ceremony later this year.

In lieu of flowers donations to an Alzheimer Association of your choice, are welcome.
Please sign the guestbook and feel free to post a memory or picture of Roy in the photo gallery!