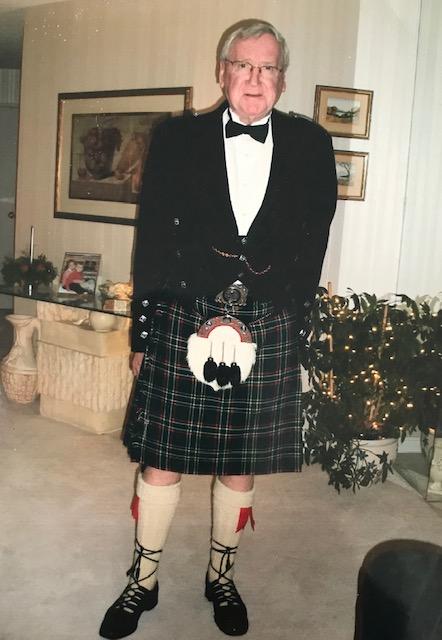 SCOTT, Robert McNaught “Bob”
Passed away peacefully, with his family by his side, at Lakeridge Health Oshawa on March 4, 2020 at the age of 82. Predeceased by his loving wife Helena (1991). Beloved dad of Graham (Lori) and Elaine (Dave). Cherished Pop of Connor, Jason, Ryan, Erin, & Ryan and Cara-Lynn Lewis. Great-pop of Blake. Robert will also be missed by many extended family and friends, including his Masonic family as well as his “fur babies”. He will be forever remembered for his love of a “wee dram of scotch”.
Robert M. Scott, known to his friends as Bob. Was born in Glasgow, Scotland on July 10 1937. Bob started an apprenticeship as a Marine Engineer with Barclay Curle Shipbuilder and Engineering Co. in 1952 and was employed by them for 1 year before leaving to take a position with William Twaddle plumbing and Steam fitters as an apprentice Plumber. He completed his apprenticeship in 1958 and was immediately called up for military service. (called National Service)
August of 1958 he married his sweetheart Helena. On discharge from the military in 1960, he resumed his career as a plumber, travelling extensively on engineering projects the length and breath of Britain. He finally decided to return to Scotland to be closer to his family Helena, Daughter Elaine and son Graham.
The family emigrated to Canada in 1966. Bob landed in Winnipeg, Manitoba. He moved to Toronto in February of 1967. He was then employed by the C.N.R. as a pipefitter/welder. In 1972 he left C.N.R. and gained employment with Texaco Oil Co. Toronto as a maintenance plumber / pipefitter. He retired in 1993.
He joined Remembrance Lodge # 586 in February 1974, he was installed as Worshipful Master in 1980, 1996 and 2002. He served as District Secretary of Toronto District #7 in 1988-1989. He was appointed Grand Steward 1990. He was also a member of Dufferin Lodge #570 and served as Master from 2005-2007. He chaired numerous committees for the former District #7. He was a member of Kingsway Shrine Club Toronto and Past President of the Oshawa Scottish Rite group. Bob joined Scottish Rite L.O.P in April 1988, Rose Croix April 1990 and Moore Consistory May 1991. He was proud to serve as Thrice Puissant Grand Master 2007-2008. He was Coroneted Honorary Inspector General 33 Deg. In 2009. His proudest moments were welcoming his son Graham into Masonry, and Installing him as Master and Thrice Puissant Grand Master.
The family wish to extend their gratitude to the emergency staff of Lakeridge Health Oshawa for care, compassion and professionalism shown to Robert and his family. Friends may call at THORNTON CEMETERY & FUNERAL CENTRE, 1200 Thornton Road North, Oshawa, (South of Taunton Road and off of Dryden Blvd, 905-579-6787) on Sunday, March 15, 2020 from 10 am until time of celebration of life in the Chapel at 12 noon. A Masonic Service will be held at noon.