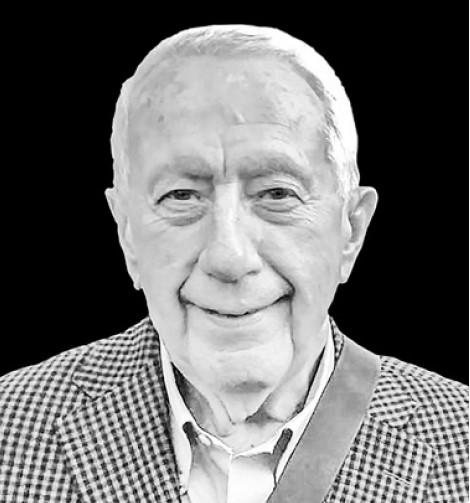 It is with great sadness that we announce the passing of Peter Kline Stinson on April 22, 2022 at the age of 87. Peter dearly loved and was beloved fully by his family - his partner of 62 years, Elizabeth; sons, Christopher (Jennifer), Timothy (Carrie), Michael (Elizabeth); and his adoring grandchildren, Hayley (Amos Hundert), Sara (Nichlas Davidsen), Connor (Shannon Romoff), Reid (Lois Macdonald), Olivia, Samantha, Mackenzie and Duncan; and great-grandson, Lowen Hundert. He is survived by his sisters, Sandra Walton Ball (David), Margaret Coutts (Barry); and brother, John (Valerie). He is predeceased by his parents, Lyle and Kline Stinson; and his sister, Barbara. Peter was born in Simcoe, Ontario and after attending high school and then university he ventured forth to build what was a successful and impactful investment career at RBC Dominion Securities. The trajectory of his career took him from Sault Ste. Marie to Windsor to London and finally Toronto. A happy conclusion to a successful career was his 9 year partnership
with his son, Michael. Peter was the epitome of a gentleman: kind, funny, loyal to his friends, respectful, and always interested in those around him. He was a truly wonderful loving husband, father and grandfather. He was a warm-hearted man and made sure everyone around him was important and equal. Tennis was his love, enjoying regular games with good friends at the Granite and Mulmur Hills Tennis Club, playing well into his 80’s. He loved the outdoors and there was no place more beautiful to him then his weekend property in the hills of Mulmur where he could be seen touring his land and admiring the thousands of trees he planted. He was always interested in the community and was active and generous in many ways. The cities that he lived in benefited from his volunteer involvement in many areas including the Anglican Church and the Dufferin Police Board. Adventuresome and with a thirst for exotic locations, Peter and Elizabeth travelled the world extensively to learn about new places and cultures as well as spending a little time every year enjoying the sun in Naples Florida. Friends and relatives may join a service to be held for Peter at the Mount Pleasant Funeral Centre - 375 Mount Pleasant Road, (east gate entrance, north of St. Clair Ave.), Toronto on Thursday, April 28, from 1 p.m. until time of service in the Chapel at 2 p.m., conducted by The Reverend Canon Cheryl C.Palmer, followed by a reception at 3 p.m. A link for remote viewing of the Funeral Service will begin promptly at 1:45 p.m. and can be found at the top of this page. The service will be recorded and saved under the Media Tab (videos) on his memorial page, for viewing at a later date. In lieu of flowers, donations in his honour may be made to the University of Toronto Woodsworth College to establish a scholarship in his name (https://engage.utoronto.ca/site/SPageServer?pagename=donate#/fund/1812) or call Barbara Track at 416-978-4197.

This event will be broadcast live via this memorial site.
Mount Pleasant Cemetery, Cremation & Funeral Centres
375 Mount Pleasant Road, Toronto, ON, CANADA, M4T 2V8 Get Directions
Thursday, 28 Apr 2022 2:00 PM - 3:00 PM
Info: The link for livestreaming will become active at 1:45pm and can be found at the top of this page.