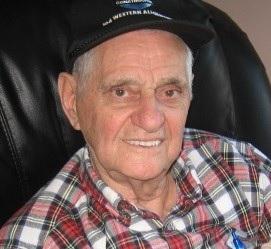 It is with great sadness we announce the passing of Milton Robert Pyke at Chartwell Centennical retirement home, Oshawa, with his sons by his side on Friday January 31, 2020. Milton was in his 92 year. Beloved husband and best friend of the late Joan Pyke (nee King)

Loving father to Donald and Alan Pyke, and father in law to Margo, Linda, Tracey and Kelly.

He was the son of the late Ann and Frank Pyke. Predeceased by brother Jack Pyke, Cyril Pyke, Violia Tiller (nee Pyke) and Vera Pyke.

Fondly remembered by his many nieces, nephews, extended family and many good friends.

Donations will be accepted to the Alzheimers Society.