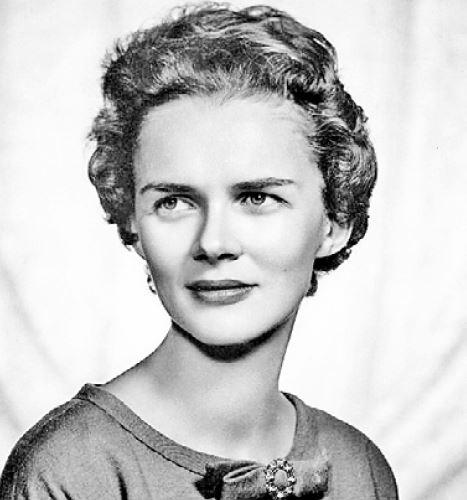 Died peacefully in her 96th year on May 6th in Toronto at Belmont House. Predeceased by her beloved husband Douglas in 1988. Greatly loved mum of Susie (Mark Bergman – London), Ted (Ev Fedorenko – Boston) and Don (Micaela Martegani - New York). Caring stepmother of Doug (Sue) and the late Andy. “Gigi” will be dearly missed by her grandchildren Peter, Mitchell, Alexander and Lana Elizabeth, as well as step-grandchildren Susan, Duff, Carrie, Robin, Jennifer, Allison and Bradley and their families. In loving memory of her best friend Mollie Armour McMurrich, Aunt Liz was a second mother to Lyn (Peter May), Sheila (Al Koop) and Ted (Evelyne) and grandmother to Nathalie, Killian, Alexa, Zac, Vanessa, Sam, Laurel and the late Daniel. Aunt Liz will also be deeply missed by the Proctor clan: Michael, Caroline, Nick, (Max, Lochie), Andrea, Eleanor, Kathy, Heather, Lesley, and Adam and by Anne McMahon and her family.
Born in Toronto on Sept. 23rd, 1924 to Fletcher and Lila McPhedran, she was the younger sister of Barbara Proctor and Sandy McPhedran. She was a Go Home Bay girl, went to Brown School followed by B.S.S. She graduated with a Bachelor of Commerce from Trinity College, U of T in 1946, and did a year of post graduate work at Duke in 1949. She had an interesting career as an economist, which included working for The Bank of Nova Scotia, The Bank of Canada, and the Government of Canada, before marrying J. Douglas Gibson in May 1959, to whom she was a devoted wife. They were enthusiastic travelers, active Canadian Institute of International Affairs members, and she keenly supported his passion for cottage life at Ahmic Lake.
Mum used her financial skills as a volunteer book-keeper at several local NGOs including at the Head Injury Clinic at Sunnybrook and the Epilepsy Association of Toronto, and she kept up her academic interests through her study group. She was the family 'glue', and was a good friend to many, many of whom shared her love of opera, classical music, theatre, Jane Austen, and the New Yorker. And yes, she adored her cat Tabitha.
Mum was a resident at Belmont House since October 2011, where she was fortunate to be surrounded by several old friends and many compassionate staff members. The family would like to express profound gratitude to Norma Navarro, Mum’s devoted caregiver, as well as Joy Godoy, Florelee Sabado and previously Karen Legaspi, who gave mum superb care and companionship. Heart-felt appreciation to the Belmont staff, in particular to Gail Walker, Donna Locke, Dr Silvy Mathew, Veronica Nandur and Dekyi Kalsang on 2 East.
In lieu of flowers, for those who would like to make a donation in Mum’s memory, she was a long-time supporter of Sistering, a charity which helps homeless women in Toronto: http://www.sistering.org
A short private commemoration will be held by family via zoom. You are welcome to sign the guestbook on the Mount Pleasant Funeral Centre’s web page for Elizabeth Gibson. We will miss Mum terribly – but oh how lucky we all were to have her in our lives.
Order Flowers
Make a Donation
Help Extend the Memorial
Order a Keepsake Book