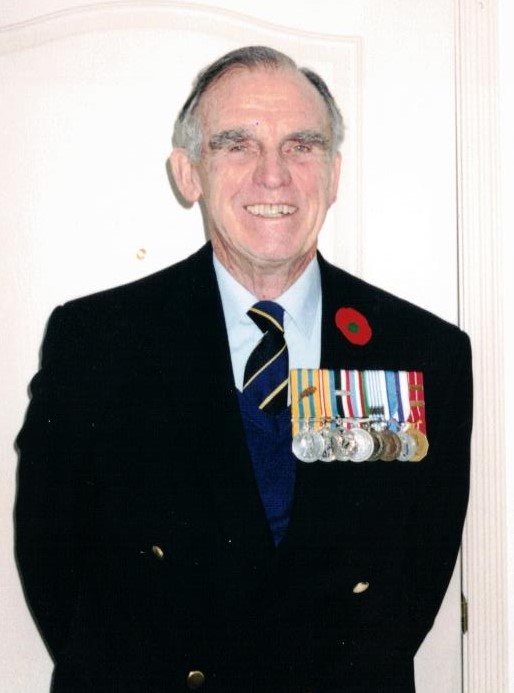 
Ken died 16 August 2020 at Sunnybrook Veteran’s Wing, Toronto. Born in Guildford, Surrey, England into a military family, and following the death of his father in 1940, Ken moved to Montreal in 1943 with his sister, Gwen, their mother, and her Canadian husband.


Ken leaves wonderful memories for his beloved wife of 49 years of marriage, Mary. Also mourning the loss of a much-loved father, Grandpa, and brother are Geoff (Jennifer), Miranda, Daphne, and Gwen. He is fondly remembered by his Australian sisters-in-law, nieces, and nephews.


A Korean War Veteran, serving as a rifle platoon commander with The Royal Canadian Regiment, he was Mentioned in Despatches and wounded at the Battle of Hill 187. He also took part in numerous patrolling actions. A graduate of the Canadian Army Staff College, Ken proudly served with the Special Air Service Company, The Regiment of Canadian Guards, and The Royal Canadian Regiment during 34 years of military service. Following his retirement from the military, Ken had a second career with Emergency Planning Ontario as Director from 1980-1992.


Moving to Sidney, BC to enjoy year-round sailing, he quickly became involved with many organizations on Vancouver Island as a volunteer and member. Always fit, Ken jogged, worked-out, played squash and golf, and sailed on “Woomera”. Music enjoyed included Opera, classical, jazz, and Big-Band. A charming, gregarious, and generous man, Ken was blessed with a keen sense of humour.


Heartfelt thanks to Dr Deering and the K2W staff at Sunnybrook Veteran’s Wing for their compassionate care during Ken’s final years. Private interment at Mount Pleasant Cemetery.


In lieu of flowers, please consider a donation to The Salvation Army of Canada, or a charity of your choice.