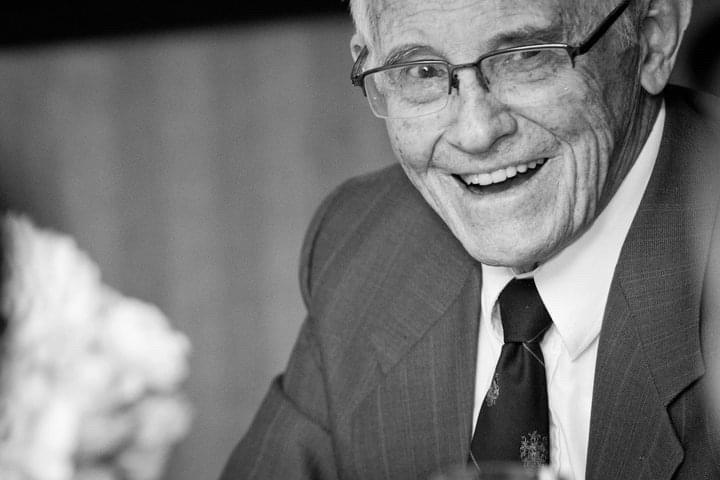 John Walter (Jack) Goldsmith. Jack, 93, died on June 4th, 2022 at Scarborough General Hospital. Jack was born on Sept 25, 1928 to Charles Henry Goldsmith and Mable Goldsmith (nee Brooks) in the Toronto Beaches where Jack grew up and developed a love for canoeing, tennis and dragon boat racing. Jack met a tennis player, Rita, at Kew Beach during university who became his best friend
and lifelong partner.

Together in marriage, they raised their family of 4 children and shared passions for boating, skiing, camping, travelling, ballroom dancing and square dancing. We can still hear the callers from tapes when they practised in the living room.

Jack and his good friends Ted and Howard, began what turned to be lifelong projects to establish family cottages. Jack and Rita opted to build their own. They were both up for the challenge of building a summer retreat while living in a tent for several summers. That cottage has brought joy to 4 generations of Goldsmith’s and still counting.

Jack leaves behind his daughter, Linda, husband Tim and 2 grandchildren.

Jack had a long successful career working for the Federal Government for over 40 years as a Revenue Canada auditor where he put his Chartered Public Accounting certification into practice.

Jack leaves behind his son, Gary, wife Rhodora and 3 grandchildren.

Jack was a devoted husband and father to his 4 kids. He let his actions speak for him as he was a man of few words. Preferring to figure things out and get things done rather than talk about them. He was always willing to lend a hand creating, building, moving, fixing, rescuing, listening and so much more…we will all miss him dearly!

Always leading by example, he was forever patient, thoughtful, practical and caring.

Many thanks to Gloria and her Shadow Health Care Services for 3 years of exceptional and loving care of Jack, his dog Sandy and his home. The family is forever grateful.

A private family gathering and celebration of life will be held at Pine Hills Cemetery in Scarborough, where Jack will be reunited with his beloved Rita. In lieu of flowers, we ask that you make a contribution to Scarborough General Hospital as a way to thank them for
the care they provided Dad.
Order Flowers
Make a Donation
Help Extend the Memorial
Order a Keepsake Book