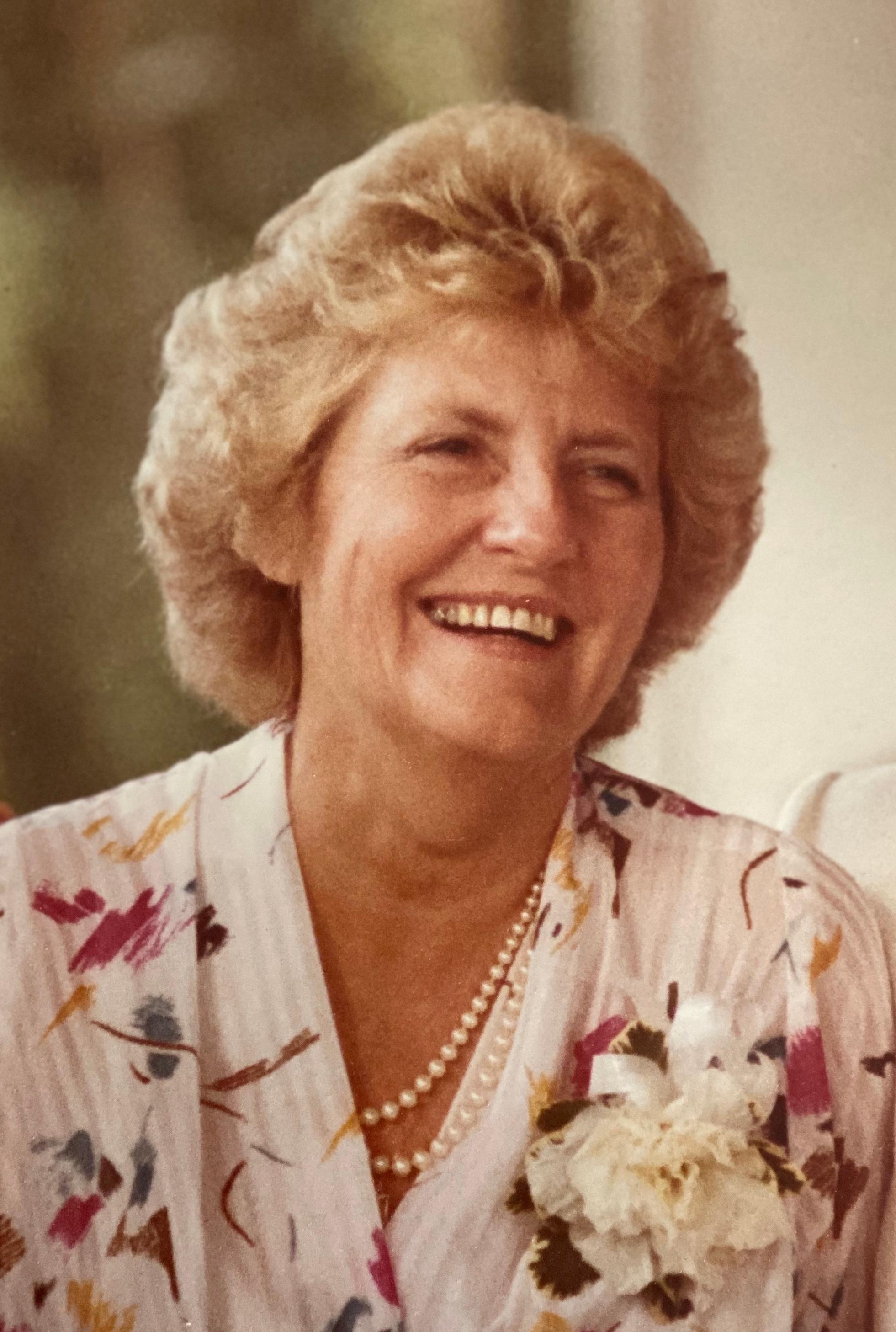 Born in Newry, Northern Ireland, Mom lived with her grandparents for several years when her parents came to Canada. Once reunited in Toronto, she continued to be very close to her extended family. Mom grew up in the Beach and was a proud Malvern grad, reminding us of her athletic ability and her “M”. She remembered the names of her classmates her entire life. And she was remembered as the tall, slim blonde on the boardwalk. Mom and Dad continued to live in the Beach after they were married in 1948 until making the move to Agincourt, where they raised a family and made many friends. They returned to the Beach for their last 25 years together. Theirs was a life full of laughter and love, songs and stories, which set an aspirational standard for their children and grandchildren.

Mom was glamorous, gracious, generous, grateful, smart, charming, beautiful, funny, cheeky, with a heart big enough to love lots of people. She had the world’s twinkliest blue eyes. In short, she was practically perfect. She volunteered for years – at hospitals, the library, Church, community services programs, and teaching young mothers how to shop for a family. She curled and played crib and bridge and later in life tried lawn bowling. She was actively involved in Beta Sigma Phi, becoming President, and enjoyed many fun times with her “sisters”. Until becoming largely immobile in her late-80s, she walked everywhere (which is one reason she enjoyed being back in the Beach.) She also loved being at the cottage, whether with family and friends, the pets, or alone. Mom conquered crosswords. She loved animals and had dogs and cats for much of her life. She knit countless afghans for family and friends and also made teddy bears that were donated to a variety of charities. She cared about the underdog and always found ways to give back.

A lifelong learner, Mom was an early attendee at Ryerson’s radio courses, and later in life did correspondence courses with the University of Waterloo. She was actively involved in her children and grandchildren’s lives, who carry special memories of her in their hearts; she was the family memory bank, never forgetting a birthday or an important event. Just days before her death she was making sure the December birthdays had been remembered.

She had a special essence that is hard to capture in words but was easy to see and feel for those lucky enough to know her; to know her was to know love. Mom loved people but was content being on her own. Extremely well read, she kept reading to the end, moving to a kobo or kindle with the largest font available (about five words to the page), rereading her mysteries. For years she would listen to the news and weather on the half hour; in later life Dad would read Mom the papers.

Mom had health issues throughout her life, and never expected to live to 60 let alone 96; both of her parents died in their 40s. She certainly never expected to outlive Dad and we are sure they are both happier being reunited now, especially in time for Christmas.
Thanks to the amazing caregivers who have supported Mom for years, including Dr. Pham and her team, the wonderful Hadas, Huan, Gigi, Lois, Nigelle, Magda and so many others. You are all part of the family.

A scholarship has been set up at Centennial College to honour Mom (and Dad), recognize the role of health care providers in their lives over the last many years, and support education, which they valued. If you wish, please donate at https://myappform.centennialcollege.ca/donatenow/ and note "Ilva Prince" or "Ilva and Albert Prince Scholarship" in the Tribute portion. You can also send a cheque to the College, indicating the scholarship in the "re" line and mailing it to Centennial College, P.O. Box 631, Station A Toronto ON M1K 5E9 Attn: Emma Dunk.

Various celebrations of Mom’s life will be held at some point in the future, when safely possible.

Until we meet again, may God hold you in the palm of his hand.