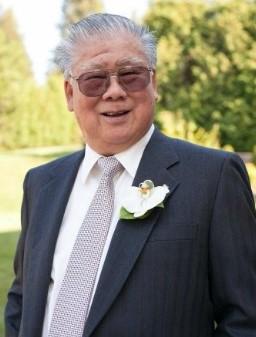 It is with profound sorrow that we announce the passing of George Phang-Lyn (彭道仁). He died peacefully at home, surrounded by his loving family.
Born in Guangdong, China, George immigrated to Jamaica as a child, building many successful businesses despite having no formal education.
In Jamaica he met the love of his life, Sophina. They had four children together, and the family immigrated to Canada in 1976. They opened George's Tastee Foods, a thriving family-run bakery, restaurant, and wholesaler to this day.
Admired equally for his success and his heart, George often said one could never be too kind or too generous. He was a longtime donor to several causes, most dear to him the Tsung Tsin Association of Ontario, of which he was a founding member and its longest-serving president.
As president, he spearheaded numerous changes to ensure the longevity of the association, most notably the decision to conduct all future Tsung Tsin meetings in English and Chinese. George correctly predicted that the move would result in greater participation from the younger generation, but continue the association's legacy of community-building and preserving Hakka culture.
George designed his house himself, using technology like geothermal heating to prevent future renovation costs, and made design choices that allowed all of his adult children and many of his grandchildren to live there comfortably for years. His home was his pride and joy, but what he loved most was having family and friends gather in it for good times, creating wonderful memories.
Above all else, George considered his family his greatest achievement. George is survived by his devoted wife, Sophina, sister Marie (Laddie), brother Cecil (Christine), children Jennifer (Gary), Stephen (Barbara), Lawrence (Nathalie), and Gary (Karen), grandchildren John (Melanie), Jessica, Samantha (Jordan), Alexis, Thomas, Cassandra, Erich, Katrina, Vanessa, Paulina, Rachel, and Kevin, and great-grandchildren Ayla and William.
In lieu of flowers, donations may be made to the Tsung Tsin Association of Ontario through their website: tsungtsinontario.ca
A visitation will be held Tuesday, August 2 from 4-8 p.m. at Elgin Mills Cemetery at 1591 Elgin Mills Rd E. in Richmond Hill. Funeral services will begin at 10 a.m. on Wednesday, August 3 at Elgin Mills.