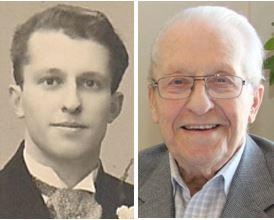 On April 24, 2021, Frederik Kuntz passed peacefully, at age 95, surrounded by family and the caring staff of Grace Manor, at Holland Christian Homes in Brampton.

A teenager during Nazi occupation in World War II, he risked his life as a secret courier in the Resistance, talking his way past German patrols while carrying messages in his shoes. After the Liberation of the Netherlands by the First Canadian Army, Fred studied physics and mathematics at the Free University in Amsterdam, until he was called to serve four years in the Dutch military. With an honourable discharge as First Lieutenant in the Royal Electrical Mechanical Engineers, he remained a lifelong proud veteran of the Technical Services.

He married Ina in 1950, moved to Baarn, in Utrecht, and started Frits Kuntz Printing. Immigrating to Canada in 1952 with Ina and their first of four children, Fred began work the morning he arrived, at Reid Press in Hamilton. Within a year, with $900 down, he bought a house on Mohawk Road, where he opened a Dutch bookstore and printing company, starting with a hand-cranked press and, in 1953, his first Heidelberg press. The family moved in 1960 to Etobicoke, where Fred and a partner launched KaVee Press in Rexdale, employing 10 people.

A hard worker, loyal husband and sometimes stern father, with bursts of humour and fun, Fred was foremost a man of faith: an elder in the Christian Reformed Church, he prayed at meals, read chapters of the Bible aloud at dinner’s end and sought God’s guidance day to day. He sent the kids to public school.

He loved fishing, camping and steak barbecues, enjoyed a game of Klaverjassen with a glass of Jenever, collected stamps, fossils, Florida seashells and other odd bits, followed Toronto baseball and hockey, usually voted conservative but subscribed to The Toronto Star, saved prudently but lost a bit on Nortel, donated blood regularly to the Red Cross, and took the family to Disney movies, Sunnyside pool, the McMichael gallery, provincial parks and on other adventures. He wasn’t the best driver. He enjoyed classical organ, read spy novels, murder mysteries and books about UFOs, learned computer programming in night school, methodically traced centuries of family genealogy, curated his and Ina’s travels in brilliant albums, and completed crosswords in two languages with perfect penmanship. He was a skilled graphic artist and talented landscape artist in oil, pastel and watercolour.

After selling the printing business in the 1970s, Fred ran his own commercial art studio, then joined Canadian Standards Association as Manager of Public Relations, eventually retiring as Director of Operations, Standards Division. He applied to the Immigration and Refugee Board in 1989, citing familiarity with the law – he had helped scores of Dutch and Vietnamese come to Canada (and many of the nearly 150 “boat people” he’d sponsored stayed in touch). In his mid-60s, he was appointed an IRB Member, adjudicating refugee claims with compassion and fairness for five years; his decisions invariably stood on appeal.
Following his second retirement, Fred and Ina moved to Tollendale Village in Barrie in 2004, making many friends there, then Brampton in 2018.

Strong as an ox in manhood, in later years Fred survived two bouts of cancer, diabetes, a heart attack and other ailments with stoicism, and successfully evaded the COVID-19 pandemic despite outbreaks of the virus at his long-term care facility. Engaged and witty to the end, and professing his life-long love for Ina, “the prettiest girl here,” he simply succumbed to old age. He was unafraid of death, believing in Jesus Christ as his Saviour, the forgiveness of sins, the resurrection of the body and the life everlasting. Somewhere up there, he’s getting to know all the angels by name; they call him “Freddy.” He’s enjoying a rum and Coke, the bass are biting, and the Jays and Leafs are winning.


* * *
Due to current provincial restrictions on gatherings, a private service will be held for immediate family members only. In lieu of flowers, a donation is welcome in Frederik Kuntz’s name to either the Canadian Red Cross or the MS Society of Canada.

(The family wishes this to be a private event.)
Meadowvale Cemetery, Cremation & Funeral Centres
7732 Mavis Road, Brampton, ON, CANADA, L6Y 5L5 Get Directions
Saturday, 1 May 2021 10:00 AM
Info: Info: Due to the pandemic restrictions, the event is by invitation only. Those that are entering our facilities, require a face covering, maintain physical distancing and refrain from hugs and handshaking at this time. Extended family and friends are invited to tune in and watch a live webcast of Mr. Kuntz's funeral service. The link will appear above his photo at approx. 9:55am. Kindly refresh your browser after 9:55am to view the link.
Make a Donation
Help Extend the Memorial
Order a Keepsake Book