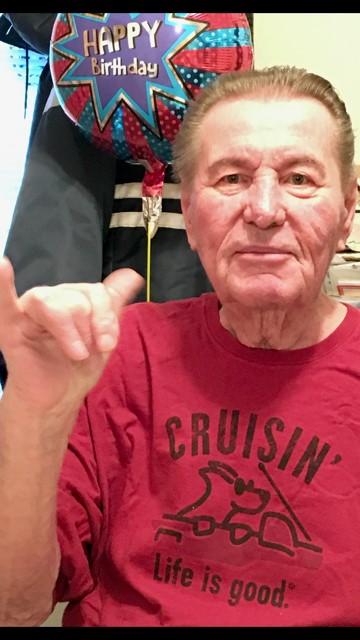 It is with deep sorrow and gratitude for a life well lived, that we announce the passing of Frank Walter Zerbe, our beloved Hubby, Daddy and Opa on January 5, 2021. After lengthy suffering, he passed peacefully with his daughters by his side. An honourable and devoted family man, Frank is now watching over his treasured wife of 61 years, Ellen (nee Must), his dedicated daughters Monica and Lynda, son-in-law Andre, his precious granddaughters Emily and Victoria, and his beloved Mini Schnauzer, Cory.
Proud son of the late Herbert and Babette Zerbe, they are now reunited in Heaven, along with his adoring younger brother Gerd. Also predeceased by his beloved parents-in-law, Marie (nee Saabas), Peeter Must and Meinhard Kubja, and many other close relatives. Frank also leaves behind cousins (Roland & Helmut), nephews/niece (Tom & Raimo, Endel & Liia), and other family members near and far in Germany, Sweden, Estonia, Australia, and the United States.
Born in Berlin, Germany, on March 6, 1937, a child of WW2’s tragedies and many losses (especially his father KIA and younger brother who died in childhood), Frank was fortunate to have the great opportunity to move to Toronto at age 15, joining his mother for a better life. Initially settling in the East End, The Beaches, Frank soon thereafter became a proud Canadian and married the love of his life, Ellen, in 1959. Trained as a Master Steamfitter (Local 46), Frank was a specialized technical expert whose many boiler room commercial construction accomplishments included having been Foreman at Ford Plant, Gulf Refinery, RBC Plaza, TD Bank Plaza, CN Tower, as well as work at the Redpath Sugar Factory and on the Provincial Pipeline in London, Toronto and Orillia Explosion Emergency Crews. In later life, Frank became a highly regarded HVAC Inspector with The City of Toronto (Local 79) until retirement.
A true man of faith, he was an active member of Emmanuel Lutheran Church, participating in Council and playing the accordion at social gatherings. A proud 32nd Degree Scottish Rite Mason (Remembrance Lodge) and Shriner (Rameses Temple), he participated in many philanthropic events and parades, playing drums in the Pipe Band.
Frank was an avid music lover, playing accordion, organ, singing and listening to a variety of music, especially oldies, country classics, classical and German folk music. In his younger years, he enjoyed playing soccer and hockey, being in nature, gardening, cottaging, fishing and boating. He was also a stamp and coin collecting hobbyist. Frank was passionate about travelling, whether by car, ship, airplane or rail. Significant trips he most fondly remembered were to Europe and Hawaii.
An especially proud Opa, he treasured his granddaughters, the apples of his eye, and being an animal lover, doted on his beloved pets. Frank loved spending quality time with his family and friends, whether it be storytelling, board/card games, dancing or socializing. Our original family Foodie, Frank was always in the mood for good music, good company, good food, and a good party.
Forever an optimist, despite significant childhood tragedies, and facing health challenges in late life with resilience and stoicism, this noble man put up such a valiant effort to continue to be present for his family. Despite enduring Skin Cancer and Bladder Cancer diagnoses, surgeries, and treatments over recent years, in the final chapter of his life, Frank bravely faced the challenge of declining and debilitating health due to Congestive Heart Failure.
This kind man with a sense of humour, showed strength of character, integrity, commitment, reliability and loyalty in everything he did. He wanted everyone to get along and love one another despite differences of opinion, faith and creed. We miss you so deeply, yet know you are now at peace. Your spirit and everlasting presence will endure. We know you will always watch over us and continue to be our guiding light. We will strive to be our best selves to honour your life.
A special note of appreciation to his Urology/Oncology Team at Southlake Hospital (Dr. Green, Dr. Fenkel and Dr. Rahim) who were able to work miracles to eradicate his cancer prior to his CHF diagnosis; Southlake Hospital doctors and nurses, and to homecare palliative care nurses (Cindy, Olga) and PSWs (Nancy, Tayo) who provided him much needed support and dignity in his final months. Also thankful for the Margaret Bahen Hospice care team (esp. Lisa and Helen) who warmly welcomed our dear dad in his final hours of life.
“Thank you for your patience with me when I was less than my best and bedridden. I was a good man with a good heart.”