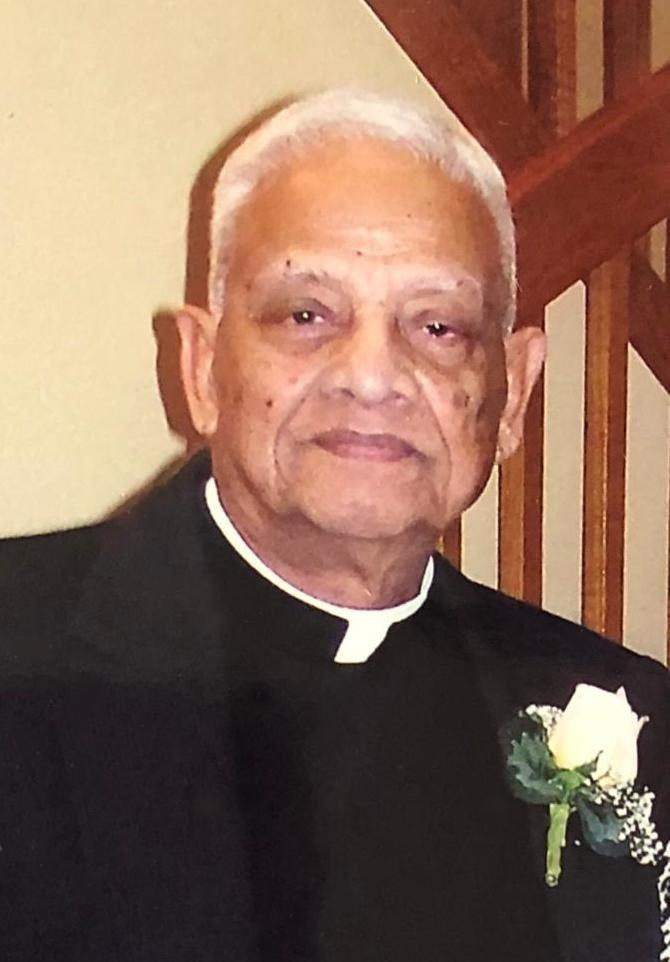 Rev. Dr. Francis Xavier Muttoo passed away peacefully at Credit Valley Hospital in Mississauga, Ontario on January 10,2020, at the age of 94.

Rev. Muttoo was born in Guyana, South America, the seventh child of Mary and Joseph Muttoo. He married Mabel Drepaul in 1948 and this union lasted for more than 71 years. He served in many parishes in his early years of ministry in Guyana including the Corentyne, West Coast Berbice, East Coast Demerara, and Georgetown. He obtained his Bachelor of Arts Degree in Oklahoma, his Master of Theology Degree in Winnipeg and at the age of 50, his Doctor of Divinity in Toronto. Rev. Muttoo was a lifelong learner.

Rev. Muttoo is an ordained Christian Minister who served in Trinidad for many years, after leaving Guyana. He and his wife and six children immigrated to Canada in 1965. He served in Neepawa, Manitoba; Assiniboia, Saskatchewan; and Winnipeg, Manitoba; eventually joining the Lutheran Evangelistic Movement. He also served in Buffalo, New York and the Bahamas. He was a trail blazer and was called upon to build and grow churches as that was his particular gift. In his dynamic and charismatic ministry, thousands of lives were touched and brought to Christ.

Mabel was the love of his life - 71 years of marriage clearly demonstrated his love and devotion to her. He stood by her in sickness and in health, in good times and bad times, and held her as his top priority, stating to all that she was and is the heart of the family. He delighted in her incredible cooking, calling her the greatest cook in the world! As a Dad, he lived the example he wanted his six children to follow – living a life of faith, forgiveness, and grace. All six learned how to embrace lives of service and connection to others and are incredibly proud to have had a vibrant and loving father like him. His son was the ‘apple of his eye’ while his daughters were the ‘stars in his eyes’. All who knew him remarked on his generosity, treating all like they were unique and special creations of God. A great joy in his life was to perform weddings, funerals, baptisms and prayer meetings for his family and friends. He believed in sharing the Word of God through this ministry. Rev. Muttoo loved to laugh and make others laugh. He began every sermon with a joke! In his later years, he warmed the hearts of countless strangers in elevators, restaurants, shopping malls, and other venues with his quick wit and charm. His love of golf was epic and even on the golf course, he was known to share the Word of God.

Rev. Muttoo was a published author of Scars of the Cross and Thanksgiving Makes the Difference, and countless other publications and articles, including a book of poems and a booklet entitled “Laugh to Live”.

Rev. Muttoo is survived by his wife, Mabel and his six children Zillah Juyal (Shreesh), Anna Scolaro (John), Elizabeth Jobse (Jim), Donald, Debbie Hurst (Martin), and Corinne Davison (Heather). He has 14 grandchildren and 14 great grandchildren, every one of whom he absolutely loved. His only surviving member of his birth family is his loving sister, Doreen Muttoo, of Toronto, Ontario, with whom he had a special and treasured relationship.

Many thanks to the wonderful staff at Credit Valley Hospital, including Dr. Kuhlman in 2C and Dr. Laura Harild and Dr. Reana Parasaram of the Palliative Care Unit. Also, a special thank you to the nurses for their respectful and excellent care of Rev. Muttoo.