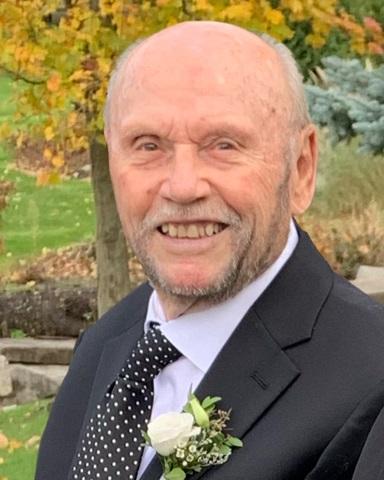 On the morning of July 8, 2022, in his 85th year, Ermenegildo Germano Giugovaz passed away peacefully. He was surrounded by his family at the Cortellucci Vaughan Hospital, where he courageously battled cancer.

Born on February 12, 1937 in Grisignana, Italy, Ermen (Gildo) was loved by all who knew him. His dreams and determination inspired his solo adventure across the Atlantic. Boarding the “Saturnia” in August 1957, he sailed to Pier 21 in Halifax, Nova Scotia to start a life in Canada. He would reside in Brampton, Ontario, and later Woodbridge, Ontario, for 65 years.

Following 30 years of service for Chrysler Canada (previously American Motors Corporation), he made sure to enjoy retirement. You could find him in Englewood, Florida, a small gulf coast town, with his tight-knit community of friends.

The only thing that he loved more than Florida was his family. He is pre-deceased by his brother Pino and his sister Maria, as well as his first wife, Argelia (June 17, 1941 – November 29, 2003) of 43 years, with whom he has three children. Beloved by his two daughters, Patrizia Behenna (Shawn) and Sandra Degli Angeli (Mark), and son David (Janet). An adored Nonno to seven grandchildren and two great grandchildren. Cherished by his second wife of 16 years, Paola Stabile, as well as her two children, Pino (Nancy) and Tania Edgar (Kevin). He is also survived by his brother, Ezio (Neda) in Italy.

To celebrate his life, visitation services, a funeral, and a reception will be held at the Meadowvale Cemetery at 7732 Mavis Road in Brampton, ON. The family welcomes you to join them on Wednesday July 13, 2022 from 4:00 to 8:00pm and on Thursday July 14, 2022 from 9:00 to 10:00am for visitation. The funeral will take place on Thursday July 14, 2022 at 10:00am, followed by the burial. All are invited to attend a reception immediately thereafter to share memories with family and friends. For those unable to attend, the service will be livestreamed. Details will be provided on the memorial site. Donations to the Canadian Cancer Society would be greatly appreciated.