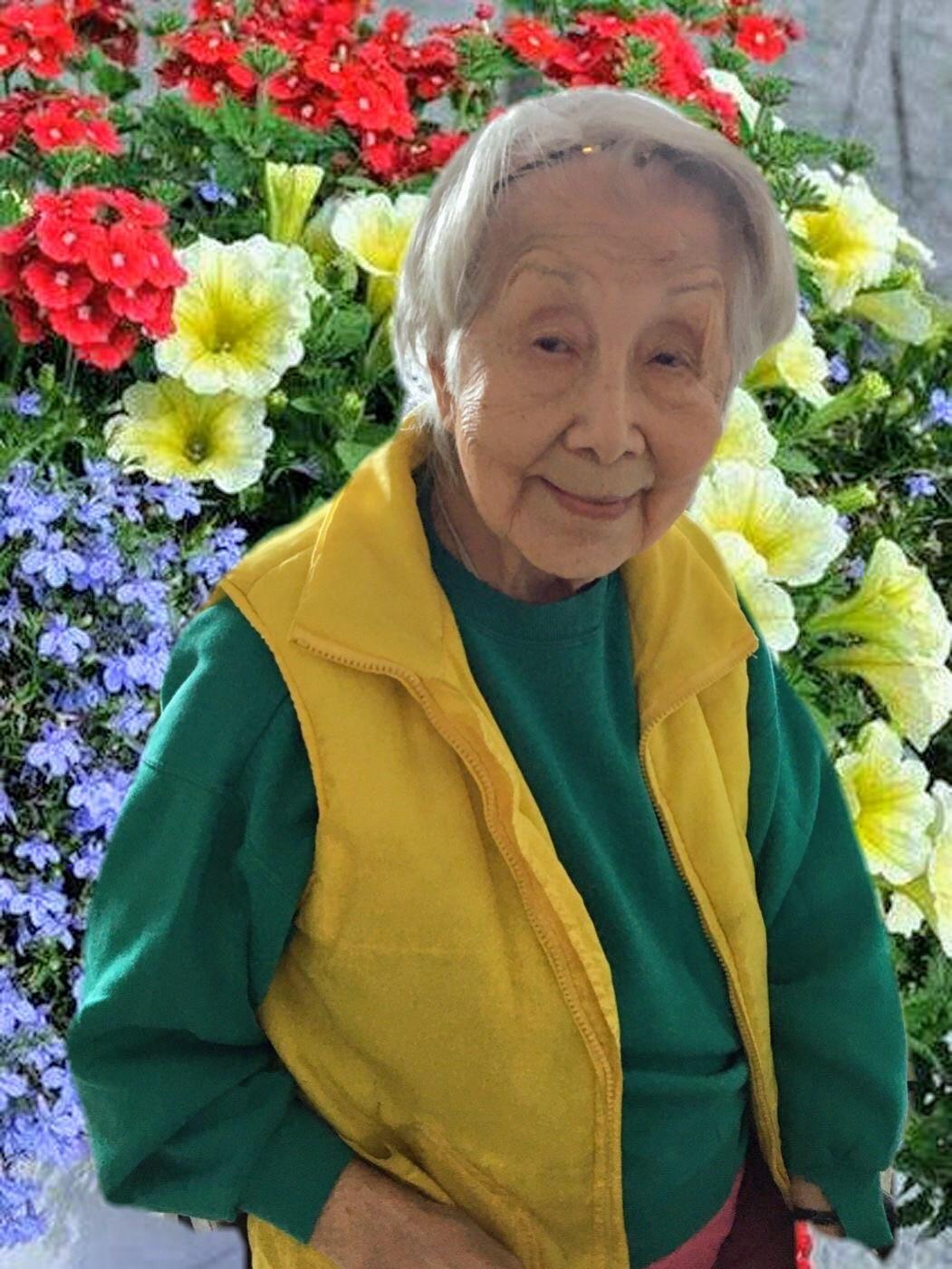 Elsie was born in Vancouver, B.C. Her father was a salmon canning factory foreman. She had 5 siblings, but the youngest, a sister, died at an early age, leaving Elsie sandwiched between 2 older (Joe & Yet) and 2 younger (Peter & Jeff) brothers. Elsie excelled in schooling, and entered U.B.C at the age of 16, but her education was interrupted when her mother decided to relocate the family to China after the death of Elsie’s father, so that the sons could help China in the fight against the invading Japanese in WWII.
Elsie met and married Sau Cheong Lum, an officer in the Chinese Nationalist Army. They, along with their infant son Charles, were forced to move to different areas to avoid the advancing Japanese troops.
After WWII ended, the family, now increased with the birth of daughter Bette, settled in Canton. However, Elsie and Sau Cheong soon went to Hong Kong, in advance of the arrival of the Communist soldiers, as they defeated the Nationalist armies. Charles & Bette were reunited with the parents later with the help of a family friend.
In Hong Kong, Elsie worked for the Canadian Embassy as a translator. In 1950, the Canadian Government restored the citizenship to female Canadians who married foreign nationals, and in 1951, we were one of the first families to immigrate to Canada under the revised law. Elsie’s brothers, who returned to Canada after WWII, have started their successful careers and families in Toronto. Jeff, the youngest, did not marry until the mid 1950s. The brothers pledged to the Canadian Government to financially support Elsie’s family if necessary to enable the immigration.
Elsie & Sau Cheong worked in a hardware supplies company managed by brother Joe. After a few years, daughter Felice was born, and Elsie & Sau Cheong saved enough money for a down payment to buy a small, three bedroom bungalow on St. Germaine Ave.
When the owners closed the hardware supplies company, it proved to be beneficial to all. Joe became a leading life insurance sales executive, Sau Cheong started his own business, and Elsie began working for an automotive parts distributor and taking courses at the University of Toronto to complete her degree. She is a member of the first graduating class at New College. Elsie then obtained her teaching certificate, and taught English and bookkeeping at Vanier Institute for a number of years before taking retirement.
Elsie faced many challenges in her life, from losing a younger sister in Vancouver, running from the advancing Japanese forces in China, then suffered the loss of daughter Bette (1981), and husband Sau Cheong (2002). Through it all, she was able to maintain her bright and energetic disposition, gardening in the summer to grow lots of tomatoes and giant zucchinis. She was always interested in advancing new technologies, and constantly pored over investment newspapers. She loved to dabble in the stock market, and became quite an adept investor. She was a strong and independent soul, and lived happily and safely in Yee Hong Gardens for some 17 years.
Sadly, Elsie suffered a massive stroke on May 2nd, and was rushed to Scarborough General Hospital (Birchmount). She passed away peacefully on the eve of May 25, 2021.
In addition to daughter Bette and husband Sau Cheong, Elsie was also predeceased by her brothers Joe (Pearl), Yet (Eva), Peter (Vicky), and Jeff.
Elsie is survived by son Charles (Fong), and daughter Felice; Taiko (Jeff's widow); grand daughters Jennifer (Miles), Alicia (Jay), Carolyn, Lauren (Jeff), and Nicole (Josh); grandson Michael; great grandchildren Tyler, Maddie, Nolan, Brayden, Evan and Joseph; many nieces, nephews, and grand nieces and grand nephews.

(The family wishes this to be a private event.)
Mount Pleasant Cemetery, Cremation & Funeral Centres
375 Mount Pleasant Road, Toronto, ON, CANADA, M4T 2V8 Get Directions
Wednesday, 2 Jun 2021 10:00 AM - 11:00 AM
Info: Due to current COVID-19 gathering restrictions attendance will be by invitation only

(The family wishes this to be a private event.)
Mount Pleasant Cemetery, Cremation & Funeral Centres
375 Mount Pleasant Road, Toronto, ON, CANADA, M4T 2V8 Get Directions
Wednesday, 2 Jun 2021 11:00 AM - 11:45 AM
Info: Due to current COVID-19 gathering restrictions attendance will be by invitation only

(The family wishes this to be a private event.)
Mount Pleasant Cemetery, Cremation & Funeral Centres
375 Mount Pleasant Road, Toronto, ON, CANADA, M4T 2V8 Get Directions
Wednesday, 2 Jun 2021 11:45 AM - 12:15 PM
Info: Due to current COVID-19 gathering restrictions attendance will be by invitation only
Order Flowers
Make a Donation
Help Extend the Memorial
Order a Keepsake Book