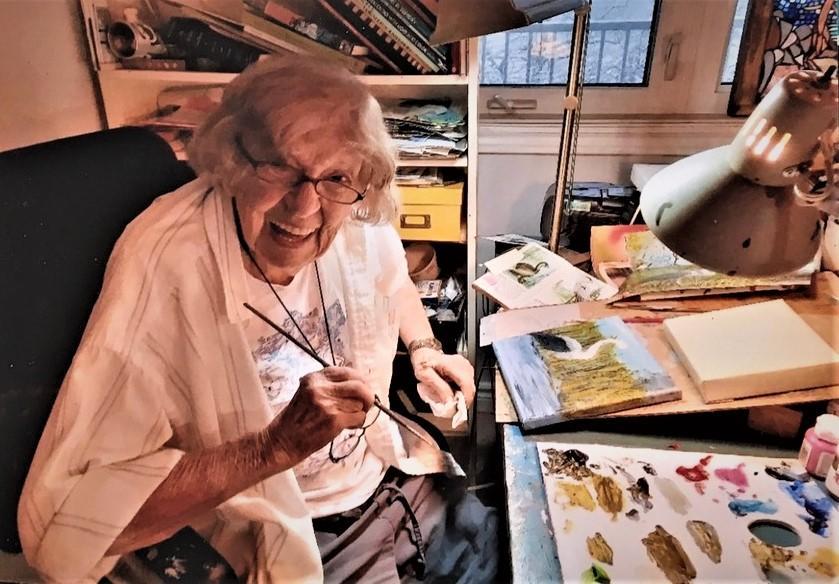 In the words of her friends Barbara and Gary, ‘Jane was wonderful, delightful, talented, smart, irrepressible.’ My mother was also loving and funny, stubborn and wise, fascinated by science and knowledge, art and music.

She was born Aug 10 1928 to Norman Farrar and Iris Cicely (Baker) Farrar, and lived in Montreal and Asbestos in the Eastern Townships QC. Graduated Bishops’ University in Lennoxville QC in 1948 with a BSc in Biology, minor in Chemistry. Her first job was at the Royal Victoria Hospital in Montreal in the Chemistry Lab department.

The family moved to Ontario in mid 1950s, and she worked in the Chemistry Lab departments at Sunnybrook Hospital, and at Oakville-Trafalgar Memorial Hospital.

She married William James Carson (deceased) July 5, 1958 and resided in Oakville, where she had two daughters, Mary and Jillian. She was a regular choir member in the soprano section of St. Jude’s Anglican Church. She also served a term as a director of the New Oakville Figure Skating Club, to which both daughters belonged. She was a member of the local branch of Voice of Women, and of the United Nations Association.

In 1988 she and Bill moved to Fergus, Ontario, where they resided until 1993. Then they moved to the beautiful East Coast and lived in Sydney, Cape Breton, NS, where they spent many happy years. She was a member of St. Mark’s Anglican Church, Coxheath, until it closed. Jane was a painter, and an active member of the Cape Breton Artists Association. For a millennial project in 2000 she and Bill made it a point to scout out as many lighthouses as possible. Bill photographed them, and Jane painted them – 27 in all.

William predeceased Jane on Feb 7, 2004, age 83. In May, 2008, she returned to Ontario and lived in a condo with a wonderful view of a conservation area in Ajax, and close to her eldest daughter Mary and son in law Daniel.

Deeply missed by daughter Mary and son in law Daniel Lozinski; daughter Jillian Carson-Jackson and son in law Paul Jackson, and grandchildren Aria and Elizabeth Jackson. Also by her brother John Farrar and sister in law Gillian (Fraser) Farrar; nieces Christine Farrar, Sheryl Bibby and her spouse Lee Bibby, and grandnieces Brooke and Isla, and all who she touched with her art.

Due to Covid, no visitation or service will be held at present. A Celebration of Life will be held in Ajax this spring at a date to be confirmed. If you wish, donations to the CNIB would be appreciated in lieu of flowers.