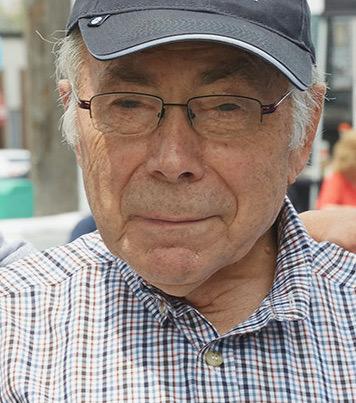 For the last couple of years, every day he spent with us was cherished. Eberhard bravely fought terminal illness in order to enjoy and spend as much time as possible with his family and all the people he loved. He passed away quickly and peacefully with his caregiver Rosa by his side.

From humble beginnings in the rural village of Stützengrün Germany, Eberhard was the youngest of 12 children raised during wartime. Memories of the 5 youngest boys (all under 10) include picking mushrooms, berries, raising rabbits, entertaining themselves and getting into mischief whilst their older sisters did their best to reign them in. Meals in the small dining room were a crowded family affair occasionally shared with the goat who needed to be brought inside from the cold. In winter the children taught themselves how to “ski”. They found planks of wood, attached their shoes to them with rope, and would be lucky to get one slide straight down the village hill before their “skis” fell apart. Little Eberhard would have had to be very patient waiting his turn. There is a story of at least one broken leg. Although life was not easy, strong close family bonds were formed that have endured five generations.
In 1959 Eberhard joined three of his older brothers who had by then settled in Toronto. Right away, he began working in the fledging Sigma Tools on Crockford Avenue. He spent the next six decades with his brothers working and helping build Sigma Tool and Machine & Falcon Fasteners to be the businesses that we know today. No job was too big or too small for Eberhard. Even if you just needed a battery, extension cord or some other widget, he likely had it in his office, or knew where to find one. He worked closely with the employees making lifelong bonds. He has been to more happy weddings than any of us could imagine.

Eberhard saw the best in people and changed lives by encouraging them to take on challenges and offering opportunities when he could. He generously shared time, knowledge, energy and sometimes even shelter with those who could benefit from a helping hand. Moulded by his upbringing he couldn’t tolerate waste, often saving things “just in case” and finding new homes for gently used items – books, bicycles, skis, skates….

Having never been married and with no children of his own, he loved his nieces, nephews, and their children unconditionally. Family time at either of the cottages has always centered around meals. We have many memories of large dinners at the Alpine cottage during which he sat at the head of the table in “his” chair together with as many as 20 of his extended family. Three generations would linger long after dinner was over sharing stories about the ski day, opinions about life, memories from different times, and any subject imaginable.

True to his family upbringing, any time of day was Kuchen time, even before breakfast just to quell the appetite. He can rest in peace knowing that even his great nieces and nephews in Canada can make “good” sauerkraut and schnitzel thanks to his instructions and influence. They don’t even shy away from pickled herring, leberwurst or blutwurst and can happily spread them on a piece of dark rye bread. He wasn’t much of a drinker, but did enjoy a sweet gewürztraminer, and had even been seen mixing orange juice with a dry red to sweeten it up.

He maintained and helped build the connections between all the generations both in Canada and Germany. He often facilitated visits by family members between the two countries. He was so proud of all our accomplishments, and ready to share anything new with the rest of the family, or for that matter, with anyone else who showed interest. He kept track of the ever-growing family. If you needed to know a birthday or wedding anniversary, he knew.

A voracious reader who devoured books on a broad range of topics from travel, to politics to human nature. He could engage those of all ages in lively discussions about any of his interests. Much of what he read inspired his travels where he often chose the unbeaten path where he could learn about different cultures and geography. The mountains, deserts, jungles, cities and all the people and history those places had to offer interested him greatly. He will be remembered fondly for the unique souvenirs and interesting stories he shared.

He loved the great outdoors and enjoyed it in all possible ways. With an appetite for thrill seeking, he actively participated in rock climbing, glider, small plane flying, skiing, and windsurfing. It was in his younger days while climbing with the Alpine Climbing Club on Mazinaw Lake’s Bon Echo Rock where he discovered the perfect little piece of land that was to become the site of our family’s summer cottage.

As he aged, he loved long walks, hiking and off-road driving. For many years he was part of a group that met weekly to “hike” the downtown streets of Toronto. He developed a passion for and commitment to the preservation of the Bruce Trail, making it one of the main recipients of his charitable giving. He loved to explore and see what was “around the next bend”, no back-country road was going to get the best of him, his buddies (or anyone else up for an adventure) and his Toyota Forerunner with its super-winch and off-road tires.

He enjoyed nature with all its flora and fauna. He regularly brought fresh potted flowers to the cottage, which we would enjoy and then plant outside in spring. He had a small vegetable patch, grew beautiful roses in his garden at home, and helped maintain the outdoor grounds and gardens at work. He was forever seeking the perfect squirrel-proof bird feeder, to ensure the birds survived the winter. This provided us with viewing entertainment from the cottage dining room throughout the cold winter months.

We are fortunate to be part of this large and loving family, the legacies of Ernst and Kamilla (Gottsmann) Leistner. Most remained in Germany, but not Herbert, who ventured to Canada and then brought Volkmar, Walter and Eberhard to settle with him in Toronto, where they shared work and family life for many decades.

He is survived by: Eleanore (Herbert Muller), Volkmar-Henry, Willi, and his sisters in-law Donna, Irma, Inge, Christel and Joan

There are over 90 nieces, nephews, their spouses, children, and their grandchildren who knew him and loved him dearly.

We thank all our friends and their families in advance for their love and support. We encourage you to post your memories and stories below. Due to COVID restrictions, and in lieu of a more traditional celebration of life, his ashes will be scattered in the Mount Pleasant Cemetery Memorial Forest at on November 20th at noon. If you can, and because this is an outdoor event, we invite you to join us there, and then for a thoughtful walk through their forest. The nearby visitation centre will be open shortly before and after as a place to warm up, and we will have a small display of favorite photos and memorabilia. Their restrictions will only permit 25 people at a time in the visitation room and no food or drink in the centre.
In lieu of sending flowers, Eberhard would be happy to have inspired you to go outside and enjoy the great outdoors the way he did.

Mount Pleasant Cemetery, Cremation & Funeral Centres
375 Mount Pleasant Road, Toronto, ON, CANADA, M4T 2V8 Get Directions
Saturday, 20 Nov 2021 11:30 AM - 2:00 PM
Info: Due to limited capacity for indoor service. Attendance indoors will be limited. Scattering to take place in the Mount Pleasant Cemetery Memorial Forest at 12:00 PM. Proof of full vaccination status and government issued identification will be required to attend. Masks must be worn at all times. Please leave time prior to service to check-in.
Order Flowers
Make a Donation
Help Extend the Memorial
Order a Keepsake Book