The portion of Dr. Sandy James Pritchard memorial that you are trying to access requires an extension in order to become active again. Would you like to contribute to the memorial?s extension?

Sandy passed away peacefully at home on October 9, 2021, surrounded by his four children. He was tragically diagnosed with glioblastoma in early 2020. Sandy is survived by his mother, Nancy; his sisters, Jane and Brenda (and their families); his four children, Logan, Hunter, Madison (Jake), and Baylie; and newborn grandson, Rowan. He was predeceased by his father, Dr. Wilmer (Bill) Pritchard.

Sandy was born on November 17, 1953, to Bill and Nancy Pritchard in Leamington, Ontario, on the shores of Lake Erie. Music was central to Sandy’s childhood, whether the big-band sounds of his father’s ensemble, the Motown radio of nearby Detroit, or the evening serenade of a family piano. Sandy grew up a multi-instrumentalist - piano, double bass, flute - and handed down the musical tradition to his own children. Miraculously, he continued to sight-read Oscar Peterson even after he had lost his ability to read the morning paper.

In his youth, Sandy excelled at Leamington District Secondary School (1972) and worked as Head Lifeguard at Point Pelee National Park, the southernmost point of Canada. He was a natural athlete, a point that did not go unnoticed, later in life, by a journalist who asked him to pose shirtless as the Sunshine Boy. Sandy never forgot his small-town beginnings, where he was “Streak” to his closest friends.

Sandy went on to build a renowned private practice in aesthetic plastic surgery which he operated for over 35 years in Yorkville. His happy clientele and loyal staff are testament to his integrity and talent as a surgeon. He genuinely loved his craft - a combination of arts and science - and preferred a low profile with a focus on achieving exceptional results for his patients. During surgery, he played music from his childhood and scrubbed in his young children for the occasional demonstration. Sandy served on the Executive Board of the Canadian Society for Aesthetic Plastic Surgery and as its President from 2013 to 2014.

Lasting friendships emerged out of athletic camaraderie at The Devil’s Pulpit & Paintbrush, Toronto Lawn Tennis Club, and Toronto Golf Club. Sandy’s mastery of golf’s short game was no doubt a product of his surgical finesse and Scottish heritage. After long days, he savoured a cold martini - Tanqueray, shaken, twist-of-lemon, no vermouth - and gave all his energy to his children.

Sandy’s proudest achievement was raising his four children, to whom he devoted himself completely.

The family would like to extend a special thank you to our friend Dr. Mark Bernstein. We are grateful for the attention and care of the Neuro-Oncology Centre at Toronto Western Hospital, the Princess Margaret Cancer Centre, the Odette Cancer Centre at Sunnybrook Hospital, and the Temmy Latner Centre for Palliative Care.

The family will hold a private service at Rosedale United Church this weekend. In lieu of flowers, we ask that you consider a donation to the Neuro-Oncology Clinic at Toronto Western Hospital.

We had the privilege of meeting Sandy on several occasions, and remember the kind, charismatic, and fun man that he was. Please accept our deepest condolances and sympathies, as he will be greatly missed.

Our deepest condolences for your loss and to your family. We have witnessed firsthand the kind and generous man that Sandy was. As we have learned through our friendship with Madison, Sandy had a tremendous impact on her life and was a terrific father and person. We are sending you strength during these tough times and will always remember Sandy with high regard.

Although I only met Sandy on one occasion it was a special one - Jake and Madison’s wedding. To see the pride and joy that Sandy clearly felt as he watched the bride and all his children that day, and on into the evening, was a sight to behold. He was a gracious host who welcomed everyone with warmth and a smile that reached his eyes. My deepest condolences to the entire Pritchard family, and to all who will miss this man among men. ❤️

You only had to know Sandy briefly to know that his children were the centre of his universe. He loved them passionately and thought so carefully about how to raise them so that they were well rounded, thoughtful and not privileged. He often talked about his child rearing decisions as we drove around Muskoka looking at cottages.
What a perfect picture you have chosen to be on this notice. It could not reflect Sandy any better. He was a wonderful man totally devoted to his family.

For a period of several years I was a regular at the Pritchard household where I was an academic coach for Madison and later for Baylie while I was completing my PhD at UofT. I remember telling Sandy that I didn't have space for another student when he first called me, and he wouldn't take no for an answer. We had so many interesting long talks about his children and how best to support them in that front room on Birch Ave (he usually had his signature martini in hand!). During that time, my mom was diagnosed with and died from glioblastoma and Sandy was very understanding. He was an incredibly devoted father. I feel really blessed to have known him and will always have affection for his daughters who probably don't realise that they also helped me through that difficult time (when I was supposed to be helping them!). Sending Madison and Baylie and the whole family love and empathy from Manchester, England xo 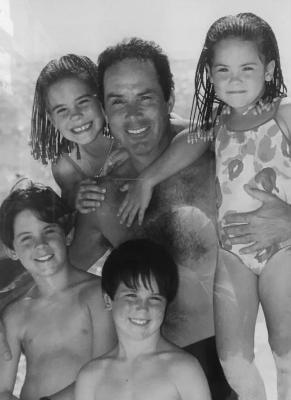