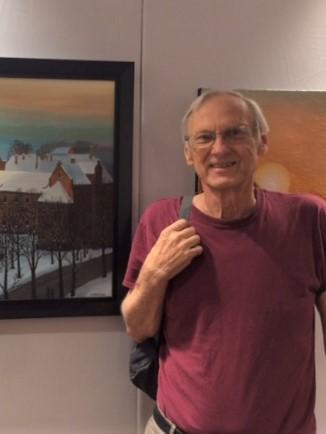 Andris (Andrew) Krumins, P. Eng.
Passed away peacefully on Wednesday, May 6, 2020 with his son Eric, cousin Mara, and partner Anita by his side.

Andris was born on January 6, 1947 in a refugee camp in Weiden, Germany, to where his parents, Janis and Milda, had fled after the 1944 Soviet occupation of Latvia. The family came to Canada when Andris was 2 years old, eventually settling on a small farm in Dundalk, Ontario. After the passing of his mother when he was 9, Andris and his father moved to Toronto to live with his aunt and uncle, Tekla and Arvids Avots, and their daughter Mara, who became more like a big sister.

Andris attended Downsview High School and the University of Waterloo where he earned his Electrical Engineering Degree. After graduation, he worked at Honeywell in Bowmanville before taking a year off to travel around Europe. He joined the Canadian Standards Association in 1974, which gave him the opportunity to travel all over the world visiting clients until his retirement in 2010.

Family was always important to Andris. He had two sons who he loved deeply, Jonathan (who, sadly, passed away suddenly in August, 2019 in a scuba diving accident) and Eric. Family time was spent travelling, skiing (of course) and at the much loved family cottage at Wasaga Beach. Andris was most delighted when his grandchildren arrived in the world - he couldn’t have been happier and was looking forward to spending much time with them, teaching them how to use the many tools and ladders that he had laying about the cottage!

Apart from family, Andris’ passions included sailing, skiing, soccer, and painting. He was a man of many talents, from re-building car engines to renovating kitchens and cottages. Later in life he became active in the greater Toronto Latvian community, joining the folk dance group “Dizais Dancis” and becoming a member of the Latvian Relief Society “Daugavas Vanagi” and the St. Andrews Latvian Lutheran Church.

The discovery of a tumor in his chest in February 2019, which turned out to be mesothelioma, was a blow to Andris, but he was always optimistic that he would be able to ski and play soccer again. Despite weeks of radiation therapy in the summer of 2019 and several rounds of chemotherapy in December 2019 and January 2020, the disease persisted. With a worsening cough and severe shortness of breath leaving him weak and tired, he was unable to fight any longer.

Andris is survived by his loving and devoted partner of 12 years, Anita Bredovskis, his son Eric and daughter-in-law Aynsley, his two beautiful grandsons, Jack and Finn, his cousin Mara and her husband Gerry Komuves and his nephews Andris and Janis and their families in Latvia. Andris will be dearly missed by his family and his many friends, both old and new. He will forever be remembered for his gentle demeanour, kindness and generosity. Vieglas smiltis, Andri.

In lieu of flowers, donations can be made in Andris’ name to the Princess Margaret Hospital Cancer Foundation Mesothelioma Research Fund at www.thepmcf.ca/AndrisKrumins

A funeral service will be held on Tuesday, May 12, 2020, at 11:00 am. Due to Covid19 restrictions, we invite our family and friends to join us “virtually” by clicking on the link that will be available at the top of this page.